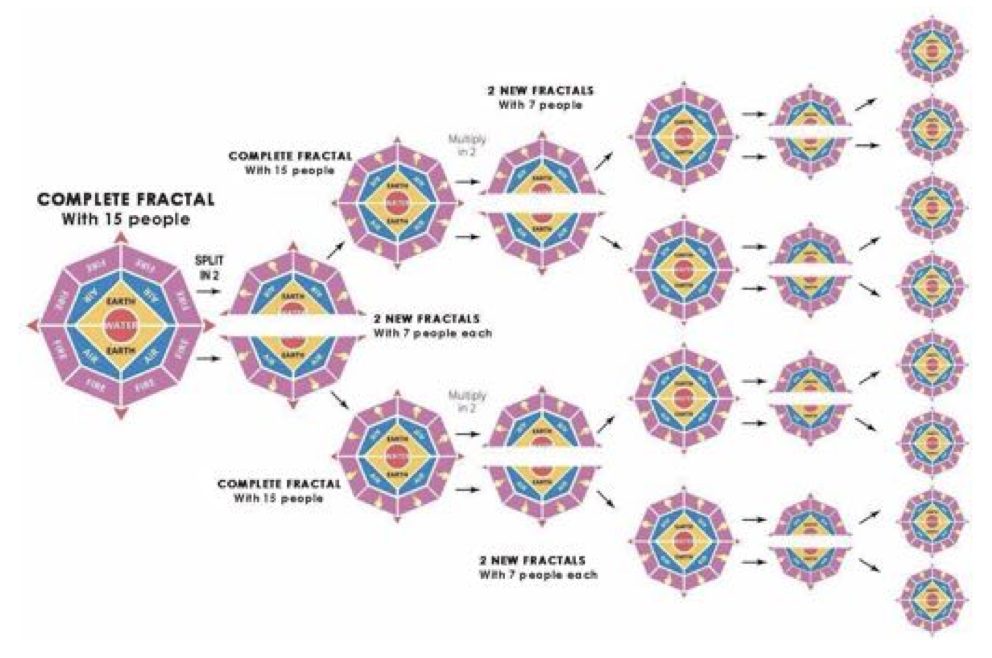 It is from a place of deep respect, love and concern that I begin to write down my thoughts.  The respect stands in relation to each person in this vast and growing community. The love I feel for the community itself and the connections, friendships and opportunities it creates.  And a concern for the presence of what I feel is a potentially harmful schemedressed in the guise of empowerment, social support and a pledge of turning dreams into reality.

The specificity of my concern stems from the fact that a growing number of Alumni are participating in what can be referred to as a “Gifting Circle”, a “Loom”, a “Woman’s Loom”, a “Lotus” and/or a “Fractal Mandala”.  In brief, and each group varying slightly, new members are encouraged to join with promises of support, conversation, empowerment, and then ultimately a financial return or “gift” once they have reached the top or center of the group. In order to step in, the new member must make a smaller financial “gift”, as well as find anywhere from 2 to 8 new members to join.  The literature connected to the running of such spaces can use language akin to what you might find in a description of ‘sacred economics’ by the likes of Charles Eisenstein. One document in particular quotes him and sites his book for further inspiration, despite the fact that Eisenstein is firmly against these types of schemes (see Eisenstein’s response below).

To all those involved…

I am writing this with great care, as I understand and truly believe that for many who are already involved, these spaces have indeed provided support, encouragement and empowerment – that for many the potential of receiving a financial gift was not a great factor in deciding whether or not to get involved, and that the impulse rather came from a wish to be part of an inspiring and supportive community of peers.

However, in addition to that being true for some, or many, or perhaps even all, these spaces are also Pyramid Schemes*. Pyramids Schemes are inherently exploitative structures which are illegal in most of the world. If for a moment, you can picture a pyramid instead of a circle, the money that comes in at the lower level of the pyramid is filtered to the top. That top member then moves on and the pyramid splits in two, with each level moving one stage higher and each new pyramid needing to recruit more members to fill the lower level positions and make the next financial contribution. The fundamental structure of the scheme follows the mathematical law of exponential growth, meaning that with each new stage of the pyramid, a rapidly increasing number of recruits are needed in order to keep it going. For example, in a Pyramid where each new member needs to recruit 6 more members, by Level Two, 36 new members are needed, by Level Three, 216 new members are needed, and by Level Eight, already over 1.5 million new members will be needed to sustain the growth. A few levels later the number of new recruits required will exceed the population of the earth. In schemes where each new member needs to recruit two new members, the growth takes a slightly longer time, but follows the same pattern.

Simply put, that level of growth is impossible to sustain and pyramid schemes therefore always collapse. When this happens the top few members in the earliest rounds of the pyramid will have received a large payout, while the vast majority at the lower levels/later rounds will lose all the money they have already contributed, as well as the sense of community that has been formed by the scheme.

I have heard and honor the argument that one’s involvement is not about the money, but rather the community.  But one must also understand and accept the fact that simply through participating in such a structure, you are ensuring that the vast majority of the individuals involved in the scheme will contribute money and receive none in return.

Eight years ago, I was asked through a friend to support a young woman who wished to enter a “Women’s Gifting Circle” but was looking for sponsorship as she did not have the $5,000 USD required to enter. It was at a time when I had worked hard and accrued some savings, and I decided to support her with half of the money she needed. When she reached the “position of receiving”, she would be awarded $40,000 USD, which we would then split.  I freely admit that for me the motivating factor was surely the money. However, it also felt righteous that I was able to support this woman in her process and development. As for her, I genuinely believe that although the money played a role, her motivation to participate came from a deep longing for connection, understanding and a place in a council of women. Months went by until she apologetically reported to me that the circle had fallen apart and dissipated.

At the time, I shared this story with only a few people, who helped me realize what I had actually, vicariously participated in.  With that realization I stopped sharing my story, because I felt ashamed, angry and taken advantage of.

I am sharing it now and my concerns above because I have seen the genuine longing for connection, collaboration and support that exists within this network.  Time and time again over the last eleven years I have seen participants and alumni coming up with innovative new ways of working with money, supporting one another’s initiatives and continuing to strive toward a kind of sacred and abundant economy.  I am a strong supporter of that persistence and exploration. But with respect and humility, I must say, that this is not the way. Because it’s impossible for me to imagine that any community, striving to empower its population, would choose to participate freely in a system that generates loss and scarcity by design.

As it concerns the Law…

Because of their exploitative structure, Pyramid Schemes are considered a form of financial fraud and are illegal in many countries throughout the world including all of North and most of South America, most countries in Europe and much of Asia.  It is a criminal offence in those countries to be involved at any level of such a scheme with varying levels of punishment ranging from fines to imprisonment.

In New Zealand for example: “Women operating a circle, or who invite others to join one, may be fined up to $600,000 per offence.  Gifting circles are illegal in Australia and Canada, and in the US have been under investigation by the FBI where more than 20 circle women have been convicted of fraud and tax evasion, with two given a 14-year jail sentence in Connecticut in 2013.” (reference below)

So where do we go from here…?

One’s involvement in a Pyramid Scheme may come as a surprise. As I experienced it personally, it can be painful and embarrassing to realize and difficult to accept.  But all too often it is smart, sincere and well-intentioned people who find themselves operating within one. Due to the fact that so many people lose the money that they have contributed , such circles can have an incredibly corrosive effect on relationships, especially within a tight knit community.

Below you can find a link to a five-minute TEDed graphic illustration entitled, “How to Spot a Pyramid Scheme”, which is available with subtitles in 14 different languages. Also below is a link to Charles Eisenstein’s essay, “Pyramid Schemes and the Monetization of Everything” where, in addition to voicing his opposition to such schemes, he also talks about alternative spaces one can build with the intention of creating abundance through gifting (monetary and otherwise). You can also find links to alternatives that are already present within the YIP network: Patreon; the “YIP Cobudget”, co-founded by Louisa Mittman (YIP4), Lyra Skusa (YIP4) and Mischa Saunders (YIP3); and “100+ Women Who Care” with whom my dear mother is involved.

I worked closely on this article with YIP4 Alum, Lucy Carver.  We feel a responsibility to raise this issue with the YIP network and encourage anyone who longs to empower, protect and inspire this community to make informed choices when engaging with empowerment circles that resemble these schemes. Read the articles below and do your own research into how these structures actually work if you are engaging with them. We encourage you to have conversations with your own support network and trusted friends regarding any concerns or questions you may have.

Lastly I will close by expressing my gratitude to those who have read this article through to the end, and my willingness to be in conversation with anyone who is interested.  You can send me an email to [email protected].

You are reading this article on the website of The Youth Initiative Program, an international 10-month social and societal entrepreneurship training that takes place in Sweden.

For more information on the program visit https://yip.se/program/#program

“People keep writing to me about “Fractal”, a pyramid scheme that uses my name and “Sacred Economics” to promote itself. So, to be absolutely clear, I do NOT endorse Fractal or similar schemes (a few years ago it was “women’s gifting circles”). I do NOT approve of them using the Sacred Economics short film to elicit an emotional response and draw people in. I think that these groups prey on people who are searching for meaning and belonging in their lives. I think most of the people involved mean well. However, the “abundance” that they promise is founded on recruiting more and more members, and eventually most of them are going to lose their money. I know that some people have a great experience of belonging when they first join. The underlying need is totally valid. And maybe there is more to it about which I am ignorant. Regardless, I do NOT endorse these groups.” Find the link HERE.

“Pyramid Schemes and the Monetization of Everything” (2013)
By Charles Eisenstein

The mathematics of the Pyramid:

The Pyramid as presented by a ‘giving circle’ called “Fractal 150”: