Last week’s contributor Marcel de Leuw introduced a reflective exercise: to think back at the day and rewind it in your head like a video, speedily but minutely. Still, Marcel stressed, it is not so much important to ask what you did, but what happened to you –the processes you were in and the ways you responded to them. Asking this can help you to stay awake in life.

I try to rewind the video of this semester, moving back to the beginning: the brown leaves whirl upwards to rejoin the trees in the park, slowly obscuring the view of the fjord, the apples pop back onto the laden branches of the orchard; the geese fly backwards to the north, low over the treetops, crying harsh cries; the sun shines increasingly bright during the early morning walk to yoga, and the water of the fjord feels warmer every time we dive in. Then there are the blisters on my heels that open further and further until their spectacular climax on the long hike with which we opened YIP6 together: 19 participants (our 20th member was to join us later) and 10 team-members. It’s been ten weeks since then.

The processes that have been unfolding in our group and for each of us individually, are not so obvious as this seasonal cycle. They have been slow and subtle – with some booms. They happened in between the daily nitty-gritty of living in community: doing our own dishes and one more (sometimes) after breakfast, carrying laundry to the laundry house just before the morning class, playing games and singing songs, discussing the hair blocking our shower drains, and going from meeting to meeting to meeting.

Often I think back at the blindfolded dance we did one evening during the Walk Out Walk On course in our fourth week. This ritual made us see clearly and experience deeply the processes we maybe had not yet realised we were in: The group got divided in two, and in two rounds one group danced with blindfolds on while the other group took care that nothing happened to the dancers. Here, we practiced to care and to be cared for, to go over our edge without falling, to welcome struggles in ourselves and in others, and to respect our differences. Now, week 10, we’re still learning how to dance together – and it’s the richest kind of learning.

I wonder if this is the secret formula of YIP: to bring together a group of young, ambitious change-makers to live and learn up-close-and-personal for ten months so that they can become (sometimes painfully) aware of themselves and how they are in the world – as a foundation for everything else. Sometimes we joke: ‘Are we talking about feelings again?!’ There’s a big commitment to collective reflection and learning. We try, pause, rewind, try again –and grow in the process. We’re learning about group dynamics, co-creation, and the parts we can play in both, because we’re living it for ten months. How very different we ran our first group meeting compared to now! And on top of all this, there’s the content of the morning courses. We’ve so far explored placemaking, permaculture, systemic change, waldorf pedagogy and political economics, and we have dipped into many of the other opportunities for learning that this community offers. 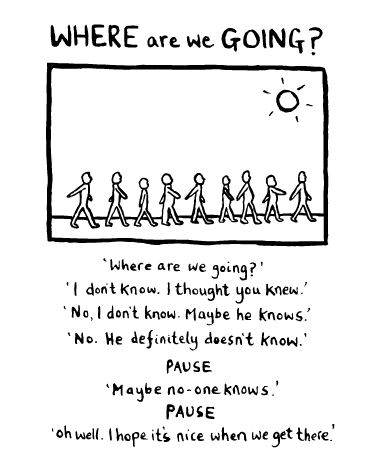 I think the following cartoon by Edward Monkton sketches the situation nicely.

What will happen to us between now and the end of June, what we will learn, we cannot know. At the moment we’re even still in the process of designing the curriculum of the last eight weeks of the program. But it’ll be nice when we get there – or better, it’ll be nice while we head there.